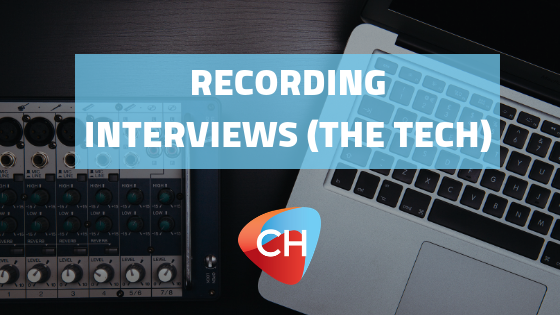 A lot of podcasts make use of interviews, and why not; they are a great way of getting people’s stories told and out to the world. However, we don’t all have the bucks that some of the “big boys” do and cannot fly around the world, kit-up a hotel room as a recording studio or get face time with the celebs. This doesn’t stop us getting big names in the diary for awesome interviews and here are some of the tools that help to do that.

The internet has meant that some of the biggest names in any field are just a tweet away, and a tool such as SKYPE means they are a free call away if they agree to an interview. If you are lucky enough to be recording a fellow podcaster, then you can login to Skype give them a call and ask them to record their end too like they would for a podcast, then send you the file. If you do the same, then you both have a clean piece of audio for each end of the conversation.

However, most of us aren’t that lucky so here are the two tools we use the most for recording both sides of a SKYPE conversation:

You can record your calls in SKYPE via a great piece of low cost software called Ecamm Recorder (Yes, it can record video too). This can record both sides of the interview on separate channels for easier editing later and there is a FaceTime version for on-the-go iPhone users as well. (Mac Only)

CleanFeed.net – This is a very simple way for recording online. The company publicise that radio giants Global often use this way. You can set up a session, email someone an invite and it will then record the input of both machines on either end of a Skype call or interview, on to separate channels. Remember that this records all noises inputted by the user’s machine, so remind them to close any noisy notifications i.e. facebook or email applications.

Free option – Still used by many local radio stations, and more so with the increase of smartphones, is to either call your interviewee on landline or SKYPE and ask them to record their end locally using a free app on their own smartphone. They send you the file, and you do the same and hey-presto a clean local recording.

Are you an aspiring podcaster? Here are some more awesome blogs:

Thinking of podcasting? Check out this video telling you why 2017 is the year to start!