The Misadventures of a First Year Farmer – Chapter 10

Tree Down and Wet Clay (Flooding On Site)

I don’t think any farm setup story is complete without a tree coming down. It felt like a sad day to begin with, a willow tree of quite some size fell in a windy storm and it took down a large part of the back fence with a neighbouring field. We therefore had to deal with it and the thought of how many years it had been growing to lose a battle with the wind was quite sad.

However we then pledged that for every tree that came down we would make use of it as firewood and replace it with four new saplings each time.

We were lucky that Emily’s parents were able to come down with what can only be described as a repertoire of chainsaws. Big ones, small ones.. Some the size of your head. Emily’s dad, Niall, definitely had the right tools for the job and we had a very enjoyable day cutting up the willow that was down to clear it from the fence line, and then cut it up into a big pile of wood burner sliced logs. 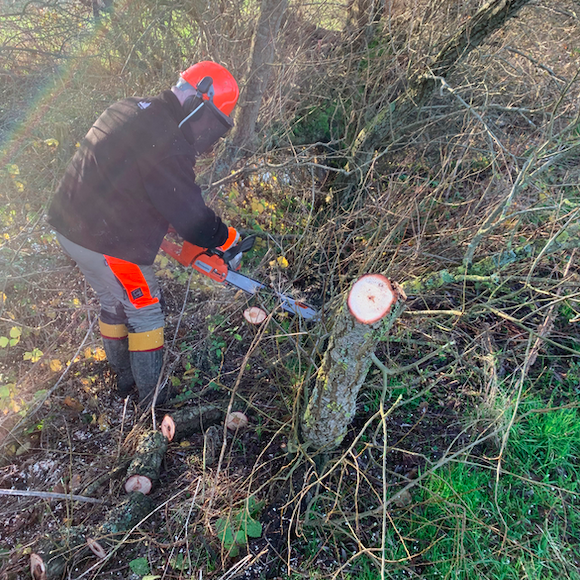 We were now living on the farm and the next few weeks were very very wet. This didn’t help the compacted soil of the farm, which is worth mentioning before we got hold of it was part of a monoculture maize operation that included big tractors, spraying pesticides and fertilisers to keep maize production going for 30+ years.

Whilst it was put through organic conversion for the two years before we bought the field, so there’s now no trace of those pesticides etc… the compaction of the clay soil is incredibly challenging to work with and deal with. Which results in when it rains the ground reaches it’s water holding capacity very quickly and then we end up with a very flooded field.

Once the tree was cut down and thrown into a big pile of logs then hit us the realisation that the logs were all the way at the opposite side of the farm to our home or anywhere that we could store them, and the ground was far too wet to get any kind of vehicle to them.

My parents were visiting when we decided that the logs needed moving and covering, and the only way to go was wheelbarrows. Filling them up and wheeling heavy lots of logs back to stack up on the other side of the farm. As the wheelbarrows were full they would get heavy and the wheel would cut into the wet clay on the way back and make a difficult long walk of a mess.

After about 10 wheelbarrow trips and looking back and seeing 20+ more to do, me and my dad who was helping with the heavy barrows exclaimed that it was a like a terrible version of “It’s a knockout”. The tv show where people are dressed in huge costumes and have to do something ridiculous like carry a load of foam balls from one end of a course to another, whilst the course spins in different directions or there are water jets trying to knock you over or an obstacle course of slippery liquids underneath.

We can laugh about it now, but I am pretty sure that many more and very different words were shouted that day. We decided never again.

At the end of the day though we ended up with a wonderful pile of logs drying by our caravan, knowing that the hard work of two weekends would keep us warm for a good month or two was a great feeling.