The Misadventures of a First Year Farmer – Chapter 4

Back to the field and it is officially Day 1. Emily had to get a second signature on our leases as a witness signature, and we didn’t know anyone in East Sussex at the time so on that day we signed our leases she drove back to Hampshire to sort this out for us.

I stayed on the field and was starting to mark things out. After several hours of moving heavy blocks and posts by hand I thought I would use the Land Rover to move all the heavy items at once… It’s a 4×4 I thought, it will easily whizz across the farm… How wet can it be?!

I loaded up the back of the landy with about 20 breeze blocks, 30 wooden stake posts and a few tools and started her up. I had not driven the landy on anything but the road since rebuilding her so was very very excited to stick her into 4×4 mode and whizz across the farm.

After a short youtube tutorial I was able to navigate the strange extra yellow and red handles near the gear stick, get it into four wheel drive mode and I was off…

I set off of the small piece of hard standing onto the grass and I travelled an amazing… THREE METRES.

Then I stopped, I hit the accelerator again, harder this time and I was going nowhere. I could hear the wheels going but I wasn’t travelling anywhere.

Knowing what I know now, I know I was making things worse… but I gave it another go and then frustratingly stepped out of the Landy… OH!

The wheels were well and truly stuck in the mud and in fact the mud was up to about the middle of the wheel and you couldn’t see the bottom of the tire anymore. I had been left alone on the farm for just a few hours and I had already got stuck in the mud.

I won’t write much on what happened for the next two hours as I went about trying to dig out the landy as it was mainly two hours of loud and rather rude swearing. Words I wasn’t sure I had even heard before, and some I even made up.

When Emily got back to the farm she found me covered in mud, with every tool, piece of wood and piece of rock sticking out from under the land rover and let’s be honest I was in a thoroughly stroppy mood. Not the best start to officially owning our first piece of land. 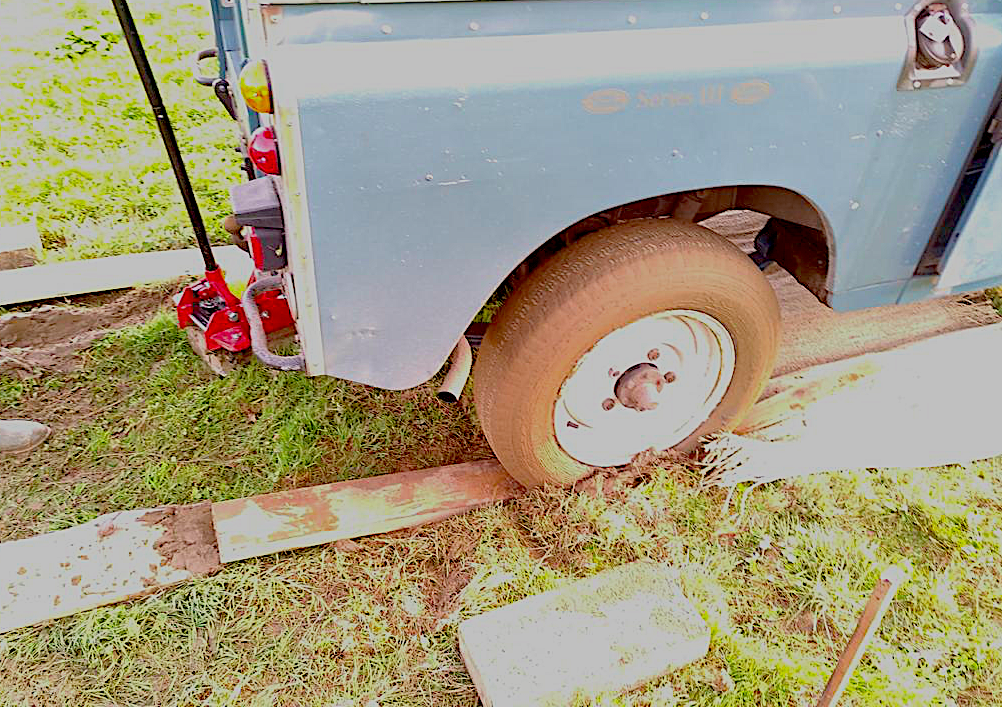 After a calming chat and a little walk around the field I came up with an ingenious plan to get the Land Rover out of the mud. Now I say ingenious… on reflection the words that really should be used are: ridiculous, dangerous, idiotic and down-right-stupid would be more suited.

This is the moment where I say: “Don’t try this at home kids” but really I mean… never ever do this, it was not smart.

I was looking at the Land Rover and noticed that my back tires were the main culprit in not letting me out of the now swamp area I had created. So I grabbed the trolley jack out, popped it on a couple of breeze blocks and jacked the back of the Land Rover up in the air and out of the mud.

The weight of the landy of course was making the trolley jack sink, it was breaking the rather weak breeze blocks and we were getting dangerously close to the mud again. These should all have been warning signs, but instead I jacked it up some more and then… I drove it off of the jack.

Genius right!! I lifted the wheels out of the mud and drove forward, fantastic plan. Well, no… What could have happened was the jack ripping the underside of the landy out, it could have ended up hitting any part of under the vehicle, it could have hit the tires and blown them out. It could have even tipped the landy over onto it’s side as I had “cleverly jacked it up by only one side”.

It was not a smart thing to do, but…. None of that happened and it did work. I was out of the mud and quickly able to get it back on the hardstanding.

Victory!! I was very pleased with myself but it wasn’t until I got back to the rented house and thought about it that I realised what I had done was dangerous… although, even now, a part of me still thinks… “But it worked though didn’t it”. 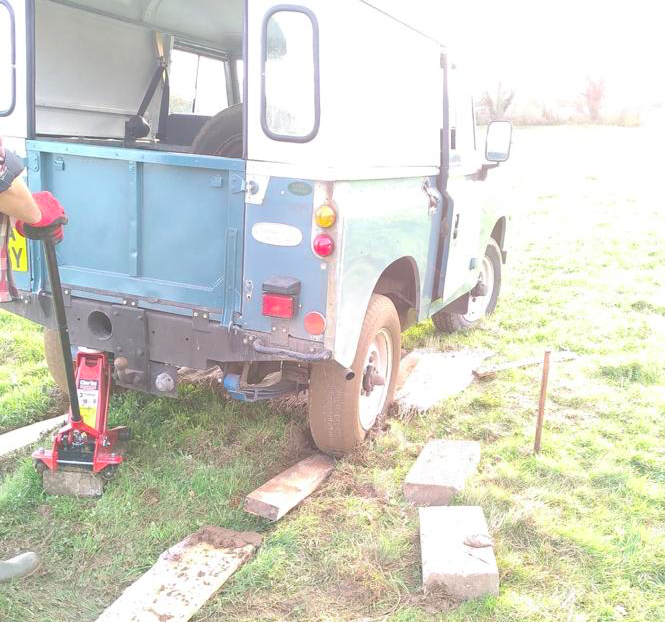