The Misadventures of a First Year Farmer – Chapter 8

“Sorry mate that’s all we can do… bye”

Around midday a large lorry turned up and on its back was our static caravan, which was a relief as we had a call just twenty minutes before from a panicked driver as he had to tackle a low bridge at one end of our road.

It was here, and the only damage on arrival was one of the outdoor lights was knocked off by a tree on the country lanes near to us. No biggie, we were ready to have it dropped into place and levelled by the delivery company.

We had paid for the “citing” option which meant they would drop it on the base we had put down and level it.

Now, it’s worth saying at this point that the track we had made the week before had a straight section that would be shared with our neighbouring farm then it snaked off to the caravan base with a little forked turn.

We were nervous about building the track so we took advice from the static caravan salesman, even to the point that we directly followed his dimensions AND sent him videos of the track and entrance to check everything would be ok. “Yep that’s fine, we can do that, no problem”.

When the truck turned up, the static caravan looked even bigger than we had originally thought and it really took some maneuvering to get it in through the main gate. But the drivers got it on to the hardstanding so we were feeling ok about the track after that, they got into position on the hardstanding and begun reversing up our new piece of track. 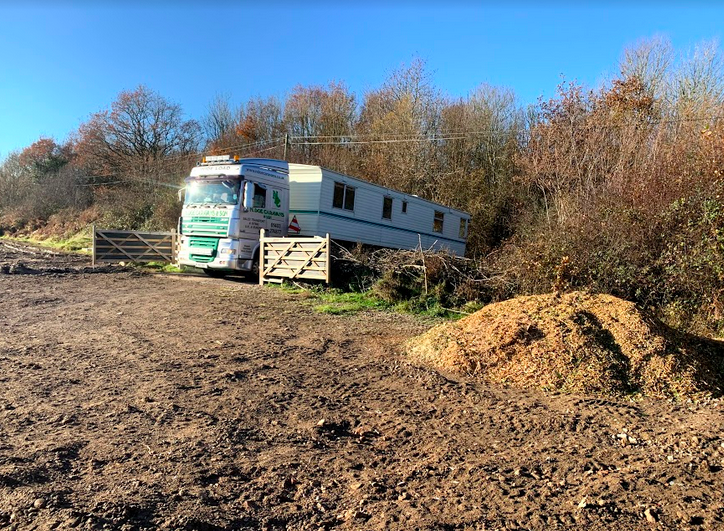 Whilst it hadn’t really dried out much over the week, it still held up well under a massively heavy truck and caravan… sure there were a few squishy parts under the wheel but nothing that would get stuck.

Slowly they reversed up and then they got to the fork… and stopped. The two delivery guys got out of the trucks, took one look at the fork and said “Sorry mate, that’s all we can do”.

After I pointed out that the specifics of the track and the fork size etc were given to us AND signed off by their salesman they replied “Oh yeh mate don’t trust a salesman they don’t know anything about delivery”…. All I could say was But… He was from your company?! 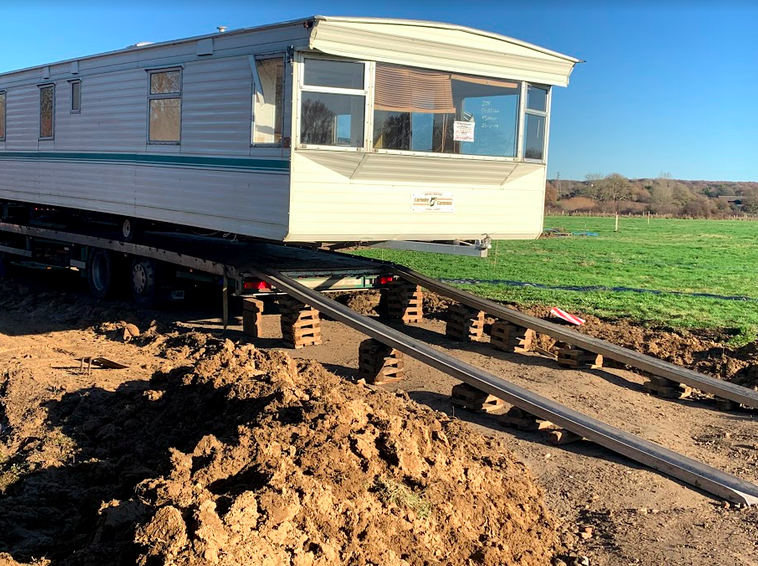 Now I don’t know if you’ve ever been in a static caravan, but they can be incredibly sturdy. But that’s when they have loads of stands underneath, without that they literally have two wheels in the middle and a tow bar at the front. So as you can imagine, leaving a caravan without any levelling etc means it is literally ass on the floor, nose in the air. Our static caravan was a fair stretch away from where it needed to be, in a position that you could liken to one person sitting on one end of a see-saw in a playground…. Ass on the floor, other end in the air… lonely and sad. 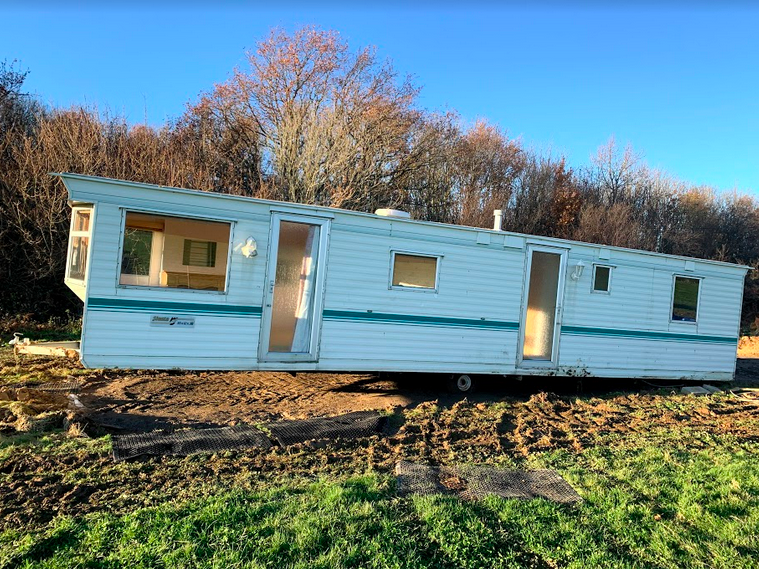 Ok fine, this is just the next challenge we thought let’s see what can be done…. Well we couldn’t get the Land Rover in front of it, we knew from prior experience it couldn’t go across the mud. Emily’s Uncle had a pickup with him and that had some decent all terrain tires on it, so we got that in front of the static on the fork.

We then had the job of trying to turn the static to meet the back of the truck, with three of us it wasn’t too difficult to up end the caravan and rotate it… until we hit the mounds of clay on either side of the track that we had been forced to leave there in the wet when building the track. DAMMIT.

With the static caravan firmly sat half turned and with its ass now stuck into wet and smelly clay soil, we grabbed the shovels and got stuck in, trying to dig out the caravan enough to rotate it fully.

Wet clay is heavy enough with a digger, let alone with some shovels but eventually we managed to rotate the static enough to get it onto the tow bar of the pickup. Two of us at the back of the caravan pushing, Uncle Matt in the cab putting 4 wheel drive on… we gave it a go…. Nope. 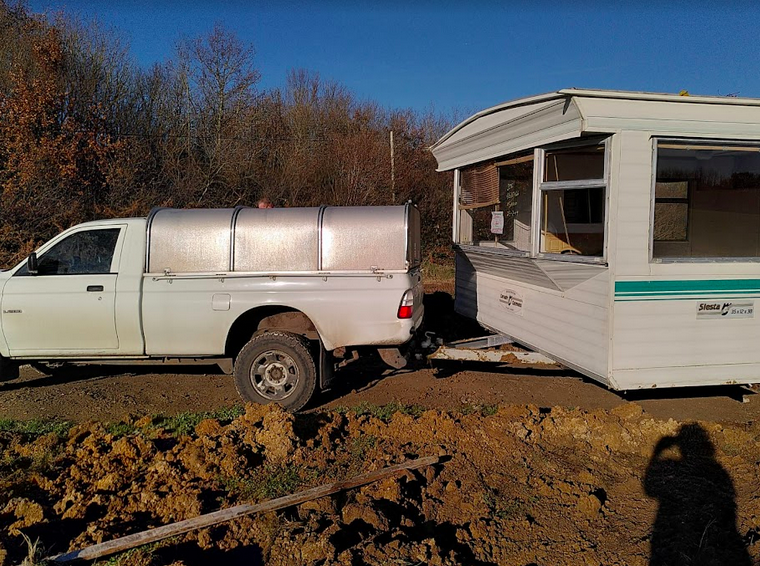 The wheels of the pickup just span on the track, the weight was too much and the track too wet. We had absolutely no chance of doing this with the vehicles we had, we needed a tractor. Having just moved to the area we had no contacts at all, except we had been to the pub. Right, call the pub to see if they know anyone with a tractor.

After about an hour on the phone trying to get hold of someone we managed to call a local company that offered agricultural services and they said they could send a big John Deere up later that day to pull it into place. Result!

So with a couple of hours to spare, we went for lunch at the local pub whilst waiting for the tractor. We turned up to the local pub absolutely covered in mud from head to toe, but they let us into the bar area and we got some delicious pub food in us and half a local ale. Refreshed and ready for the next challenge.

The tractor pulled the caravan into place easily, it was so easy in fact that I am sure the tractor itself had an attitude of “what was all the fuss about?!”. 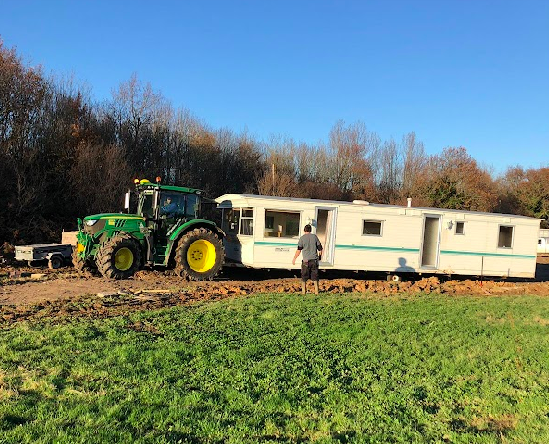 Once in position we still had to go about levelling, this meant two people sitting on the front tow bar, whilst the other ran around putting axle stands under the corners and key points. Then putting breeze blocks everywhere else. The worrying and dangerous part was that we had to climb under the caravan to do this, which at the time felt like the only way to do it… but on reflection we could have been crushed at any time.

This rung true when Emily’s Uncle stopped Emily from crawling under saying: “Let Chris do the underneath bits until it’s safe, I don’t want to have to answer to my sister (Emily’s Mum) if you get crushed… I don’t know Chris’ family”…. Thanks Matt!

We finally got the caravan levelling finished the next day, using a trolley-jack. lots of axle stands, and with a lot of commando crawling underneath. We got it to a point we were happy with, knowing that the next few months would lead to lots of re-levelling, adding more stands and loads of commando crawls. 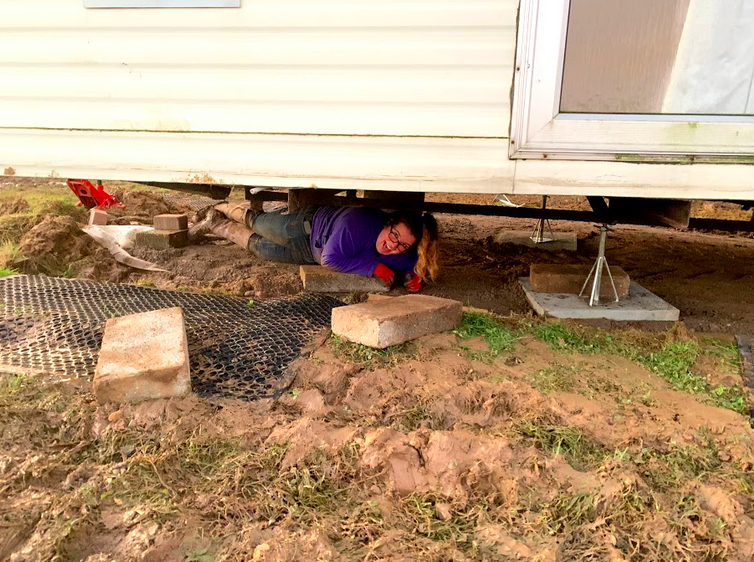 We could finally unlock the door and step into the second hand static caravan for the first time on our new piece of land… Our new home.